We all know that Firefox Student Ambassadors (a.k.a FSAs) are the voice of Mozilla and their goal is to spread Mozilla’s mission on the web to the people of the academe. Thus we at the Mozilla Philippines development group organized an event called: Firefox OS for Students.
The goal of the event is to simplify what Firefox OS really means, specially for the students. This includes why Mozilla made Firefox OS and why it’s a game changing platform not only for the benefit of the consumers, but for the sake of the spirit on an open web. And while most of them are Information Technology students, we made it clear for them about the frequently asked questions we usually encountered about the platform that they might also encounter when someone might ask them what Firefox OS is all about.

Though we gave them a few idea on what Firefox OS is all about, we also encourage them to learn more about the platform.

With an overwhelming number of audience, the event has reached 20 student attendees from different universities in Manila and in luzon.

Here are some event highlights… 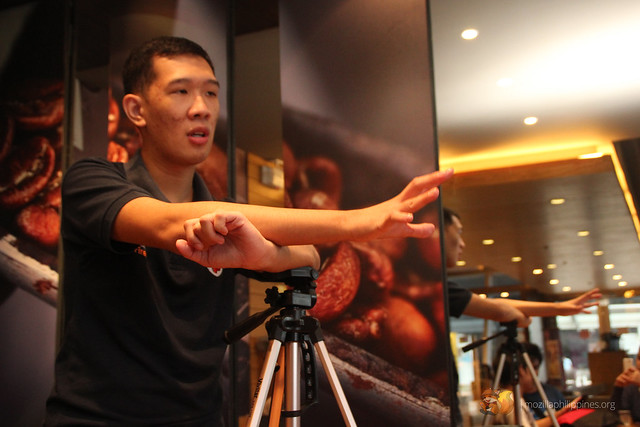 The event was cheerfully started by Kemuel Domanog who discussed about what Mozilla Philippines Community is all about and explained briefly about the Mission of Mozilla and why we at the Mozilla Philippines supports it. He also discussed about different Mozilla programs like the Mozilla Reps Program, The WoMoz initiative, WebMaker party, Firefox Flicks and a lot more. 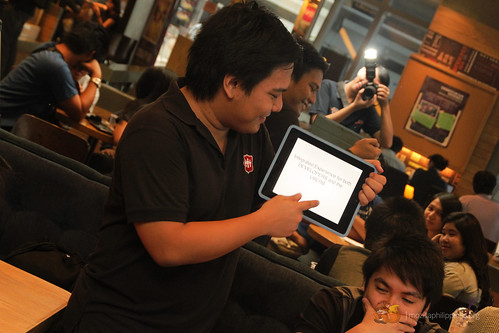 They also had a chance to try out a Firefox OS Developer Preview device, for them to learn more about how the platform really works. 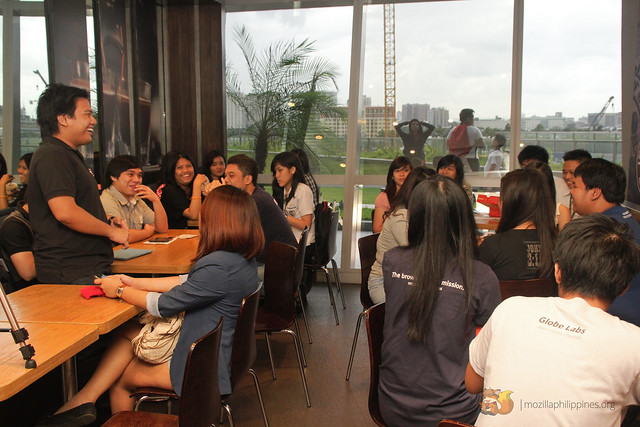 The second half of the event is all about collaboration. We asked our FSAs to group based on their schools and think of an interesting app idea that will help students. 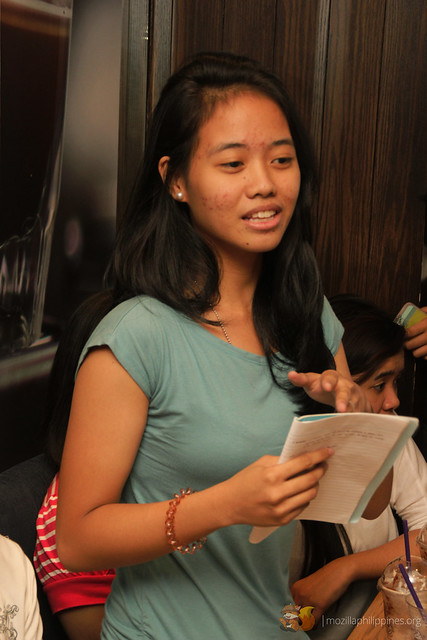 An app idea coming from UST then pitched by Marya Magno is about “MeBo” which stands for Message Bouncing. In this application, sender’s device will have the capability to detect open bluetooth devices and use them as path to send a message to the intended recipient. 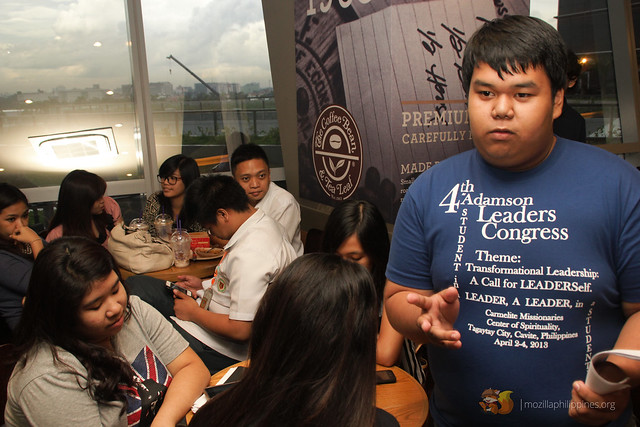 An interesting app idea coming from the students of Adamson University named “Where u @” is a scheduler application which makes the use of geotagging. The user can tag their schedule on the places in the map in which they can set the frequency and time span of the tagged schedule. Ken Doneza was the spokesperson of their team. 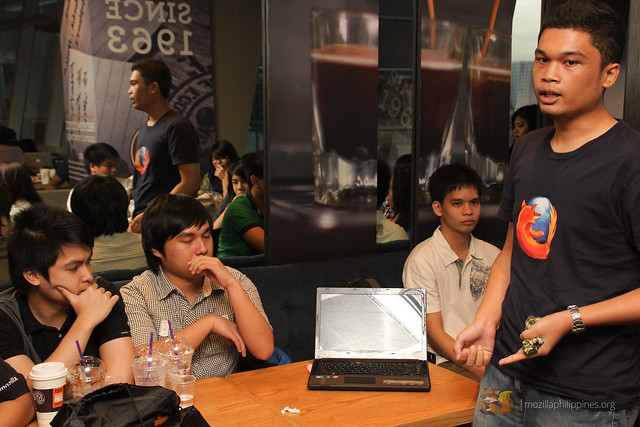 Also from the UE Manila and Bulacan State University duo team shared about an app idea called “TrackMe” where you can track your lost Firefox OS device in real time and was discussed by Roger Duran. 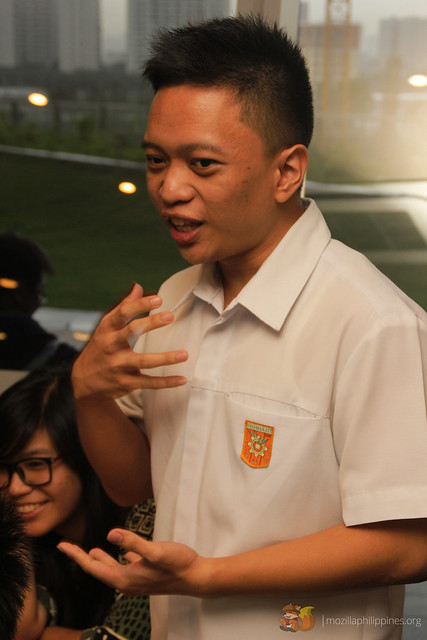 Then finally the team from FEU-Makati thought of their ideal app for school productivity that focuses mainly on FEU students. It aims to help students keep track of their schedules and remind them of course requirement deadlines. Also, they haven’t thought of a final name but they have decided to call it: CODIGO. Gerard Taguigui volunteered  to present in behalf of his team. 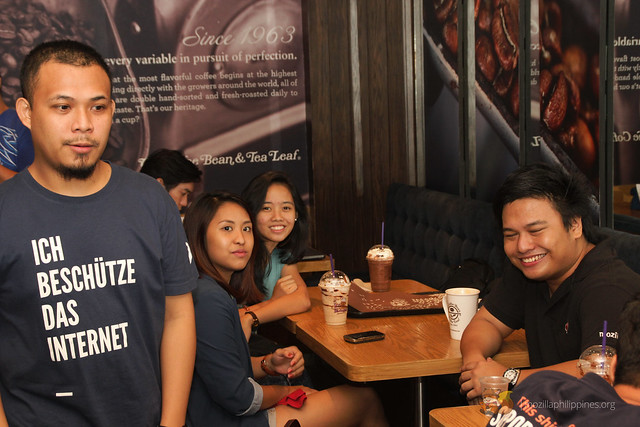 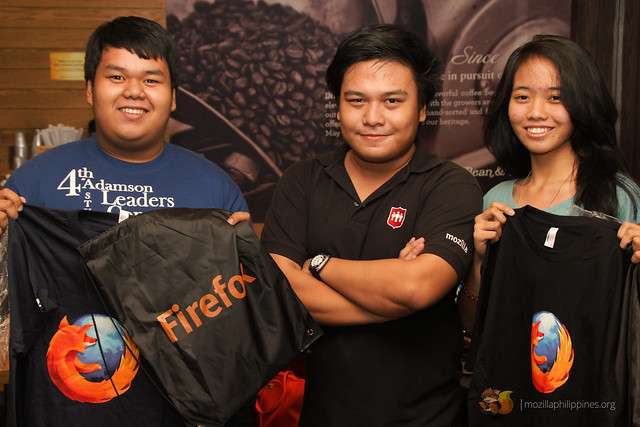 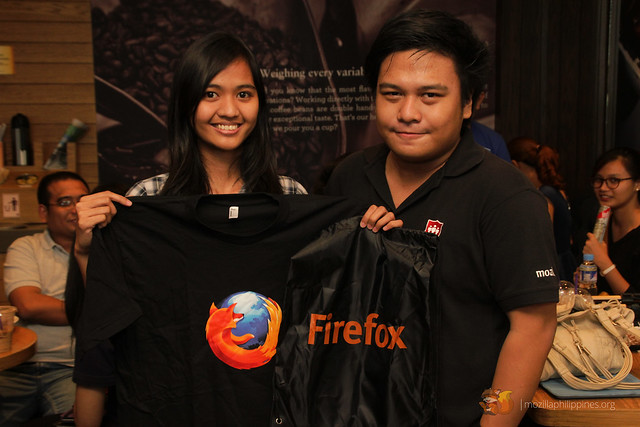 These swag packs includes a Firefox shirt! The other swag was given to Pauline Ponce, a randomly selected participant using the Raffle Hat app in Firefox OS.

Everyone is a winner at the end of the session because everyone received a Firefox swags! They brought home a Firefox Stickers, Lanyards and pins!

We believe that students plays an important role not only in spreading the mission of Mozilla, but to also, inform other people what Mozilla and it’s products is all about. More power to our awesome FSAs! And we wish you success! Maraming Salamat po! Mabuhay ang mga FSAs!

You can view the rest of the photos here.